Palin replied, “As for that VP talk all the time, I’ll tell you, I still can’t answer that question until somebody answers for me what is it exactly that the VP does every day? I’m used to being very productive and working real hard in an administration. We want to make sure that that VP slot would be a fruitful type of position, especially for Alaskans and for the things that we’re trying to accomplish up here for the rest of the U.S., before I can even start addressing that question.”

Well, it appears that she got the answer!

Unfortunately, she’s not actually correct. According to The Constitution, which it’s possible she’s never actually read, “The Vice President of the United States shall be President of the Senate, but shall have no vote, unless they be equally divided.” And according to the U.S. Senate’s own website, the VP traditionally only presides over the Senate during “ceremonial occasions.” I think Palin probably has extreme difficulty with the language of the 18th century America, given that she has pretty significant difficulty with even modern English. Then again, what do you expect from a woman who doesn’t even know what party she’s a part of… 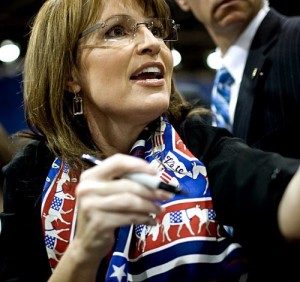 Nice donkeys! I wonder if that was on sale, so the RNC picked that up to offset the rest of the $150,000 they’ve spent on clothes and make-up for Palin (and family) in the past two months. Maybe her trips to Saks and Niemen-Marcus are designed to offset the tumbling economy. Especially since she doesn’t view paying taxes as being patriotic, this must be her way of being pro-America (unlike all those bad parts of America that she doesn’t like to go to).

Poor John McCain, though. It appears her idiocy is contagious. He has lost what little eloquence he ever had.

I really hope that someone out there comments with Biden’s latest words about Obama being tested in the next six months. As much as FOX “News” likes to portray this as an invitation for a terrorist attack, how can anyone honestly look at the situation with the global economy and think that the incoming president will have any more than six hours before he’s tested. I will agree, it was a dumb thing to say. Or at the very least, a confusing thing to say. Certainly, Obama seems to demonstrated remarkable levelheadedness throughout the campaign, so perhaps Biden was trying to draw people’s attentions to that. I don’t know. However, I do think regardless of the outcome of the election, the new president will face some serious – and immediate – trials. One of the great moments of irony recently was while I was watching FOX “News” (on the treadmill), and they had Republican Senator George Allen on, and he commented how Bush was indeed tested by the Chinese during his first six months in office when they shot down and held a US Air Force plane. In Allan’s estimation, this was little more than a test of the then-new President’s mettle. Oops. Guess FOX didn’t expect that. Much stuttering ensued on “Hannity & Colmes,” quite possibly the worst show ever.

The countdown is on now! Two weeks from yesterday…