Skip to content
“Operation Jack will be an attempt by Sam Felsenfeld to race at least one marathon a week in 2010 (61 total for the year) to generate attention that will raise funds and nationwide awareness for Train 4 Autism, an organization that works tirelessly to raise money for Autism charities.” – OperationJack.org.
Running a marathon-a-week (well, at least one marathon a week, since 61 marathons is 9 more than Sam needs to run for his 1x/week quota) is BAMF enough as it is. But when you can do something like that, where the only other activity that you’ll want to do is sleep, and do it all with the idea of raising money and awareness for something other than yourself, that’s what makes you a real man of BAMFness.
But doing BAMF things is nothing new for Sam. “After breaking his neck in a swimming-pool accident when he was 16, he was lucky to have use of his legs. Later, after taking terrible care of himself in college, his weight soared to 261 pounds. A former smoker, Sam started walking less than five years ago. Walking turned into slow jogging, and eventually, slow jogging turned into his first marathon.

Now, he’s completed 70 marathons and four ultramarathons, and has 24 Boston qualifiers and a personal-best time of 3:00:05. He knows that if he was able to work hard enough to complete this transformation, he can work hard enough to run 61 marathons in Jack’s honor. And he knows that as tough as Operation Jack might be, it’s nothing compared to the daily grind Jack suffers through as he battles the nasty neurological disorder he was born with. 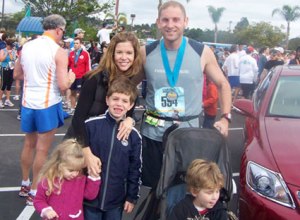