Skip to content
Elite triathlete Angel King has been dominating the Florida endurance circuit lately. She was the ninth woman overall at Florida’s Tradition Triathlon in October and won her age group at September’s Escape to Miami sprint triathlon. If she blew by you at the Jacksonville Bank marathon on her way to a 3:31 Boston-qualifying finish on December 18, you probably didn’t notice she had major back surgery 11 months ago. Or that the 27-year-old has metal rods in her spine and fused T3 through T8 vertebrae.
Nope, she’s faster than she ever was before that 36 degree day in Florida that changed her life. – LAVA Magazine
I’m pretty sure I’m biased to thinking extra-highly of folks with surgical hardware. So, really, LAVA, come on, let’s see a pic with x-rays. At least, I would have put pictures like that if it were me. Of course, I also don’t look like Angel. Maybe that explains the lack of pictures with metal rods. I dunno. But the story itself makes one thing pretty clear, without an x-ray, you’d never know that Angel had a massive set of obstacles to overcome, and she’s done so remarkably. 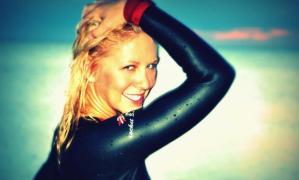 One thought on “Real Women of BAMFness: Angel King”