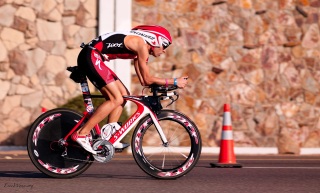 The inimitable quote machine Sir Winston Churchill is the source of the philanthropic phrase, “we make a living by what we get, but we make a life by what we give.” The spirit of this idea has largely defined my racing in Arizona, in a variety of ways. At first, it was a way to share my racing with my family, as the spectator friendly course allowed me to give back to those who truly enable me to race and who supported me when triathlon was just a dream of “someday…” I’ll never forget stopping (briefly) on the run to hug my mother in April of 2008. In 2009, it became even more primary, as I discovered World Bicycle Relief and the amazing work they do with a $134 bicycle that truly changes the world. Last year, in 2010, I “gave inspiration” to some people by making my return to racing after my near-fatal accident in March; but really, it was the race, and the volunteers, and the spectators, and the other competitors who truly gave to me – they gave my dream back to me. This year, I set out with the goal of continuing to give back to World Bicycle Relief through the Rappstar Charity Challenge, to honor the legacy of Sally Meyerhoff – who, tragically, did not end up as lucky as I did in her accident with a car – by wearing a pink band during the race, and to – of course – give the one thing that I always try to give to honor and respect the race – my best effort. But this year, the race gave me something – a lesson in humility and consequences and disappointment.

While I normally try to write something clever or funny or interesting about races, I wrote this mostly as catharsis. Sitting in my hotel room, all I can think is, “I could have finished. I should have finished.” But everyone except for me is glad I didn’t. On a day when I set out to make a life by what I could give, I ended up instead needing to ask that of countless others. Thank you to everyone who gave.

11 thoughts on “Top To Bottom”