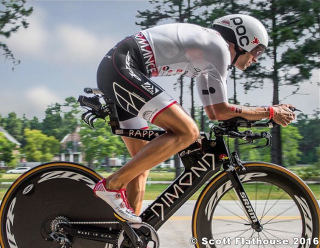 After spending decades studying how people deal with setbacks, psychologist Martin Seligman found that there are three P’s—personalization, pervasiveness, and permanence—that are critical to how we bounce back from hardship. The seeds of resilience are planted in the way we process the negative events in our lives. – Sheryl Sandberg speaking to UC Berkeley class of 2016

[N.B. unfortunately, I talk more about bodily functions than I’d like during my recap of my race in Texas. When the ultimate cause of a poor race was almost certainly some sort of stomach flu, that’s probably inevitable. That said, I realize some people don’t really want to hear about that. If that’s you, totally understood, and I’ll have no hard feelings if you just click the “X” to close this window. The TL;DR version is pretty simple: I prepared as well as I thought I could and wouldn’t change anything. I had some bad luck just prior to the race with a bit of illness and didn’t have my best race. That’s racing. And life. Get used to it and get back to work.]

*I say probably because it still could have been entirely my fault. I don’t think so, but I won’t discount that possibility.

The GI stuff made a lot more sense. My hip pain – and that feeling of being disconnected through my “core” (I hate that term) – made sense. The blood made sense. And that made thinking about “what next?” a lot easier too.
It also makes me appreciate how lucky I have been the nine times I’ve been able to win an ultra distance race. I was asked at a Q&A the next day what I had to overcome on race day during those wins. And the answer is, basically, nothing. I’ve had stuff to overcome in life and in training. I’ve talked a lot about that. But on race day? When it’s good it’s easy. And when it’s not, it’s almost impossible to overcome a meaningful setback of any kind. And small problems also stack. With 180km of biking or a hillier course or fewer turns, maybe the race would have broken up enough that I didn’t feel I needed to run 2:50. On a cooler day, maybe the additional stress of hot weather on the gut would have allowed me to work through the GI stress of some stomach flu. In a less deep field, maybe I could have managed my output a bit better and finished okay. Or maybe not. Regardless,  on this day, on this course, in these conditions, with this field, it was just more than my body could manage.
And I think that’s to be expected. The difference between 1st and 2nd in my biggest “blowout” was just over 3%. Most races I’ve won, it’s about 1.5%. A “dominant” win might actually be only 0.5% – that’s about 3min in an Ironman. Simply put, the margin of error is really small once you start talking about high performance sport.
Ben Horowitz wrote a book about his success at OpsWare. The title is the wonderful phrase, The Hard Thing About Hard Things. There was a lot that was management specific that is not really all that applicable to sport. But there’s also a lot that was applicable. And one of the fundamental truths is that while you can make a lot of your own luck through preparation, meticulousness, dedication, etc, you also need some of the old fashioned kind of four-leaf-clover luck as well.
I didn’t have enough of that kind of luck on Saturday. But it makes me appreciate just how lucky I have been in order just to be able to be there racing. Sometimes you do pretty much everything right and things still don’t work out. That’s life. Get used to it. Time to get back to work.

In trying to put some closure on what was, certainly, a disappointing day,  I settled on the following question – “Would I change anything about how I prepared?” The answer is, “No.” The outcome on race day wasn’t personal. It’s not permanent. And it’s definitely not pervasive. It was an especially tough day out there for many athletes, a large portion of whom struggled with brutal heat and then punishing rain and cold. If you didn’t have the day you expected, don’t overthink it. Sometimes, shit really does just happen…