It could have been worse…
As I neared the top of the Hawi climb, I finally saw the neutral support car (the motos have only wheels), and I flagged them down. I rolled through the turnaround and pulled over next to the car, where the SRAM NRS (Neutral Race Support) guys were waiting with a front wheel and a back wheel, certain that I had flatted. Because that’s the normal thing that happens during races. As I stopped and dismounted, I said, “I need a saddle.” I think I probably said this at least one more time, because this is not a normal thing to need, but once I did, the guys pulled a bike off the roof (I think it was the personal bike of one of the guys helping), pulled his saddle off, loosened my saddle clamp and pulled out the two rails that were still stuck in there without a shell attached, and got the saddle mounted. Unfortunately, because it’s a somewhat normal thing for seat posts and saddle hardware to slip, I have everything glued in place. It’s no big deal when traveling, because of how the Dimond breaks down. But what it means is that the saddle height and, critically, saddle pitch are fixed for the saddle that I ride. The height was not a big deal. Saddle height is relatively easy to work around and even a few centimeters of differences is manageable. Pitch, on the other hand is a big deal. I run my saddles at between 0.0 and -0.3 degrees of pitch. Essentially, my saddle is perfectly level. And I’m neurotic about this. The new saddle, measured post race, was pitched at +6.0 degrees. On the bright side, I could actually sit on it because it wasn’t broken. On the not so bright side, sitting on it meant either sitting on the very tip pointed up and driving into my prostate or sitting back on it with my pelvis posteriorly (rather than anteriorly) rotated in the way that you might ride a mountain bike to keep traction on the rear wheel and keep the front wheel light for rolling over obstacles. But neither of this is really how you should ride a TT bike. Certainly not a course like the one in Hawaii. 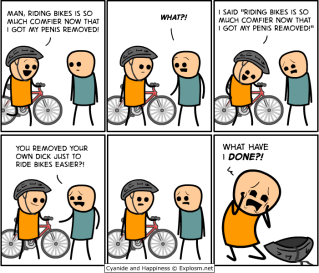 Cyanide & Happiness © Rob DenBleyker
The worst part of this was the descent from Hawi. That typically requires high cadence riding because of the high speeds, and generally power is low. My forearms and shoulders and upper back were screaming because I basically had to put all my weight on them. When you ride, your weight is distributed between your arms (or hands on a road bike), your saddle, and your feet. The harder you ride, the more weight goes to your feet, because of Newton’s Third Law. This is why TT bikes are great when you are racing but are not so great for riding to the coffee shop at a leisurely pace. I was pretty sure I could finish the ride, and given that your arms aren’t too necessary for running, I thought I might be okay for the marathon, though the tension in my upper back and neck was a bit of an issue. Once I got down from Hawi and back onto the Queen K, I sort of found a manageable rhythm of sitting on the tip, sitting on the back, and then standing. I continued to focus mostly on nutrition and hydration, at least because it was something else to think about. I was pretty sure my plan for a top-10 was done. But I thought that I could still finish the race, and that was important to me. Really important. The feeling of not finishing in 2013 still haunts me. That emptiness from IMAZ 2011, Kona 2013, and IMTX 2015 – my three Ironman DNFs – was awful. Especially Kona. I knew I wanted to finish. In 2012, when I finished 13th, I so buried myself that I don’t really remembering anything from the race. I don’t remember Ali’i, or crossing the finish, or much of anything. At the very least, I wanted a happy memory of Ali’i, and simply finishing after all this was going to be something to celebrate.
I managed to keep my power reasonably high – which helped with the discomfort by shifting weight to my feet – but I had to sit up and stand a lot. And on the Queen K that’s a killer. I lost virtually all the time I lost from Hawi back to Kona. I basically stayed even, pace-wise, with the leaders to Hawi. On the way back, I lost 12 or so minutes just on the return trip. Most of that was fighting the bike. I was stopped for less than three minutes swapping on the new saddle. The major time losses were when I was riding. I got some relief around the West Hawaii Veterans Cemetery, when the headwind picked up. With the wind pushing into me and giving me steady resistance, I was able to actually push decent power which made things much more tolerable as way more weight was on my feet. I passed quite a few people struggling – a reminder as to the penalty of mis-pacing – on the way in, and I started to be a bit optimistic. I thought maybe riding easier than I had expected would mean fresh legs and a ripping fast run. I know I can run sub-2:50, and that would have been a great way to finish.
Getting off the bike, I came into T2 with Matt Trautman and Lionel Sanders, both of whom are among the best runners in the sport. It was good company to be in if I wanted to run fast. But unfortunately, the reality of riding 150 of 180km with either a broken seat or a wonky seat had pretty well wrecked my legs. I had a lot of pain my left achilles and both of my glutes were seriously angry after doing extra work in the my big-slam-esque position and both of my hamstrings were unhappy about the extra work they had to do when I was sitting in my on-the-point-of-the-needle position. Sub-2:50 quickly changed to 2:55 quickly changed to sub-3 quickly changed to just-keep-running-and-don’t-injure-yourself-and-leave-something-in-the-tank-for-IMAZ. And that’s pretty much what I did. I never walked. I just ran the pace that was comfortable, whatever that was. I was diligent about fueling and hydrating at the aid stations. And I mostly just treated it like a longest ever training day. I mean, if Jens Voigt could ride a kid’s bike to a stage finish in the TdF, I could do this.

2 thoughts on “The Engineer’s Lament”