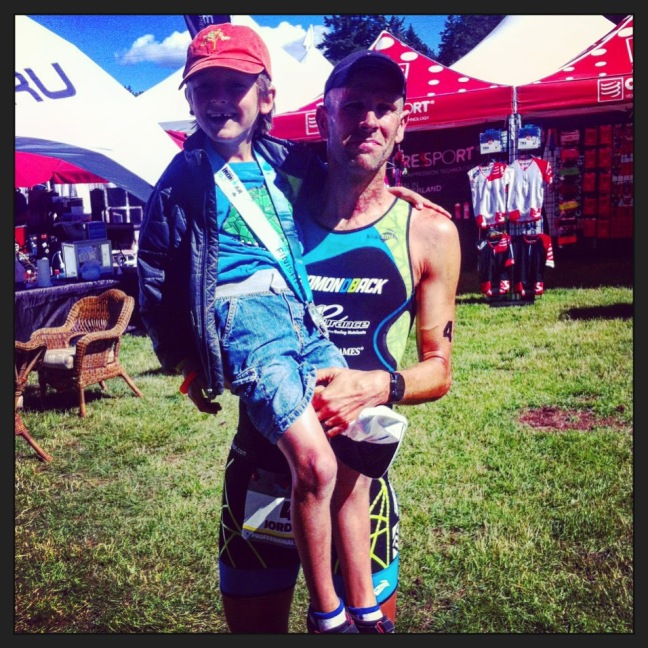 Santa Rosa 70.3 was a bit of a “freebie” in terms of the performance relative to the training I’d done. Essentially, I raced Santa Rosa off the training and taper of Ironman Texas. With some larger goals for later in the summer, I put in some solid training between Santa Rosa and Victoria.

I’m still figuring out just how long it takes me to recover with four kids. My ability to train is as good as ever. During the week before race week, I had some fantastic performances in both running and cycling, with an extremely strong cycling performance that I’d say was one of my best ever.

But, as Jill said after the race, I no longer have “space” at home. I can’t simply shut it down the way that I used to. Which is requires some creativity. It’s a learning process, and while I certainly felt I could have had a better race, I do feel that I had a good race. Just not quite up to the level of fitness I showed in training.

The level of competition at every 70.3 race is so high now, you either have to focus on a specific race or on the specific 70.3 distance to be competitive, and you need to focus on both the distance itself and a specific race to really have your very best performance. I’m still working that out, and I’m glad to have had these early season races to sort all this out. The next two races I do will be a more important ones, and I’m glad to be pretty close to zeroed in on what does – and what does not – work.

This was by far the weakest part of the race. I swam about a minute off several guys I swam with in Santa Rosa, and overall I just struggled to swim well here. I had a better start than Santa Rosa, but then I failed to execute as well from a tactical standpoint.

The load from the bike really shows up in my swimming. I was tired and struggled especially to swim straight. I swam reasonably fast, but I took a really poor line and also lost feet early because the less sharp I am, the less straight I swim.

Once again, I enjoyed swimming with the Garmin 935 that I’m in the process of writing a long-term review for Slowtwitch on. I actually felt like I had quite a good start, but it’s interestingly not really reflected in the data.

After a very good ride on my 56T front in Santa Rosa – which I wish I had used in Campeche earlier in the year, I decided to keep it on for the race in Victoria. In hindsight, I’d say this was the wrong decision. The Victoria course had a lot more turns that the Santa Rosa course, as well as more short-but-steep climbs. In combination with slightly more tired legs than in Santa Rosa, I think it would have been easier to bring on the speed with my 54T front ring. On the few flat, straight sections, I really enjoy the 56T, but on balance, I just don’t think it was the right front ring for this course.

I don’t actually perceive this as a weakness of the 1X system; rather, I’d actually say it’s a strength. Running 1X has forced me to think more about the entire process of gearing selection. With a 2X, My preferred setup was 10spd, 54-42 & 11-23. I never found my need to deviate from that. And I think, for most courses, it was right. I tried some bigger fronts – 55 in the front, most notably – but I don’t think I ever really appreciated the completeness of drivetrain configuration. To me, 55 didn’t give me much over 54, and the change from 10spd to 11spd was not significant. However, with 1X, I definitely notice the difference between 56 and 54, and I have a better sense now of which chainring to run where. And I also am much more in tune with gearing in the back. For Victoria, I ran 56-11/28. I wish I had run 54-11/28. And I’d even have considered running 52-11/26. With Marko Albert crushing the field with his 2:13:44 bike split, this is just not a fast course, in spite of the fact that it’s relatively flat.

The 52T would have been a big drop off of the highway, but with a moderate headwind there, even that wasn’t that fast, and it was an extremely short section of the course anyway. I’d never even considered the 52 before, but I see now that I need to consider it as a viable front ring for certain courses.

Especially carrying a bit more load into this race than I did into Santa Rosa, churning over the big 56 was just tough. For a half, I much prefer my average cadence to be in the 80-85 range. But my cadence for this race was 77, much more what I prefer for an Ironman, and my power was much more in line with what I’d hope to hold for a full-Ironman than for a half.

I followed through on some of my ideas about aerodynamics post-Santa Rosa, but I don’t think the nature of this course suits drawing much in the way of conclusions. It certainly wasn’t revelatory. But I also don’t think they proved to be any slower either. As always, the most important element to going fast is riding strong.

I split the difference on final decision I made after Santa Rosa. On the rough roads of Sonoma, I clearly ran too much tire pressure. I dropped my pressure for Victoria, also on rough roads for much of it, by 10psi front and rear (105 front in 22mm; 95 rear in 24mm). I think I probably could have gone another 5psi less, but certainly the lower pressure was something I definitely should have done in Santa Rosa. One decision I did not make, though, was to switch back to Specialized Turbo Cotton tires. The Continentals are better aerodynamically on Zipp rims, but on rougher roads, I don’t think it pays off. On the highway course of Ironman Texas or Campeche, the Contis were the right tire. On the rougher roads of Victoria, I think the Specialized were the right tire.

I also went back to the POC Cerebel. I think it’s possible this is a more aerodynamic helmet than the MET Drone. But I feel that the Drone is more comfortable, and I do a better job of keeping my head still with that helmet on. I’ll likely go back to it. Though I’m interested to do some more testing with what seems to be the ubiquitous helmet du jour – the Giro Aerohead.

No great insights from the Strava file for this one.

The run was the brightest spot of the whole race. I have no idea how many laps of the 10km Elk Lake loop I’ve run, but it’s a lot. There was great training out the door in Victoria when I trained here on-and-off from 2005-2008 for most things, but I would, if I had the choice, always drive to Elk Lake to run. I would not consider it a stretch to say that I’ve maybe gone around that loop 100 times. Maybe a bit less, but not much. I love this trail. I have so many great memories of amazing solo runs as well as workouts with Simon Whitfield and the rest of the gang. I even remembered some of the slight tricks – like where the small rise of a certain section is slightly less on one side of the trail than the other. It was an amazing feeling to be back out on this trail racing.

I ended up with one of the faster runs of the day with a 1:19:20 – though a ways off from the very impressive 1:15:17 of my friend Chris Baird, which was a nice testament to my overall depth of fitness as well as a reminder that your performance in any one discipline need not determine your performance in another.

In a small but surprising revelation, I decided after Santa Rosa 70.3 that my elastic laces were too tight. I felt like my feet could never really relax, and that hampered my running a bit. For the race in Victoria, I loosened them just a bit, and it made a world of difference. I didn’t notice any looseness even over the (slightly) technical trail run, but I sure was a lot more comfortable.

The run course itself was likely a bit long, in spite of every GPS track showing it as being short. From the final kilometer marker at 20km until the finish was a rare open stretch on this tree-lined course with a solid GPS signal, and what should have been the last 100m I had at 340m.

With the sketchy GPS data from the trees, I decided to use RPE and HR. The optical HR sensor on the 935 is generally good enough. It struggles with quick changes in heart rate – say for things like Tabata-style intervals. But for steady stuff it’s good. On race day, I had hoped to keep my HR in the 160s, but I also knew that there was fatigue based on how I felt and how I’d ridden, and that showed up with a HR more in the 150s.

Unfortunately, the HR data really started to flake out on the second loop for unknown reasons. The optical HR sensor is something I’ll talk more about in my review of the 935. It’s definitely not as good as a strap, and if you train and race by HR, it’s not yet good enough. But if, like me, you simply view HR as some interesting ancillary data, it’s a nice feature. You can see the data breakdown on Strava.

Being back in Victoria, I took advantage of some extended time in the ocean (57° F) to take the sting out of the race. When I lived and trained here, we did this almost daily. Since then, emerging research has shown that removing the inflammation from training is counterproductive, because you remove part of what is stimulating your body to adapt. (Simon Whitfield’s Silver in Beijing along with countless other great performances by myself and others show that it certainly doesn’t remove the adaptation entirely…) But certainly I no longer use ice baths the way I once did.

However, coming off a training block and leading into a race where I was a bit overdone, I can absolutely see the value in using ice baths to help smooth out taper and freshen up a bit more before a race. I mostly use cold – but not ice – baths now as a way to cool down before bed, as I find it really helps me sleep. Most every athlete I know understands the feeling of being too hot and how that negatively affects sleep, and I find that a cool bath or shower before bed helps a great deal.

But nothing measures up to a 10min period of meditation staring at the Olympic mountain range while cooling off in Gonzales Bay.

It was a really special experience to be back in Victoria. The race course – both bike and run (we didn’t swim much in Elk Lake) – was like a trip down memory lane. And to be able to share all of this with Quentin was really special. He loves beach combing, and it was a truly magical experience to be enjoying nature’s own cold pool, with the sun shining down, the mountains rising up from the ocean, and my son scouring the beach for shells and driftwood. The race itself wasn’t particularly memorable either way, but the overall experience certainly was.