Skip to content
After an excellent three week block of training in Penticton, tomorrow I once again pack up my car to head south. This time, however, I am lucky enough to have Jill riding shotgun. After missing many of the apparently warm days in Victoria, the Okanagan Valley smiled upon me and provided almost uninterrupted sunshine and warm weather. Wildlife sightings were in full effect with a bear on the very first ride, numerous dead snakes, one live rattlesnake named Paulo, and lots of Kokanee salmon, which I first saw when swimming in the channel. Jill and I then saw several schools in the Penticton Creek en route to the track, which is mercilessly windy. Several fish ladders were just installed in the creek in an effort to bring back this local fish. 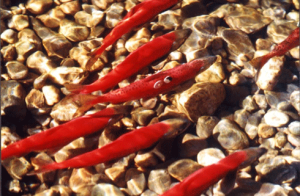 It’s hard to describe how red the Kokanee really are. They look the color of a raw salmon fillet. Speaking of raw salmon, it will be painful in the belly to take my leave from Ishin’s but fortunately, I know Blue Fish is waiting for us down in Montrose. Hard to imagine that I spent six and half years growing up in Japan without ever eating a single piece of sushi (seriously), and now I can’t get enough of it.

I’m sure the kitchen here will be glad for a chance to breathe and recovery a bit after heavy usage. Rest well, trusty stove, you’ve earned it. On the topic of culinary experimenatation and excellence, I am excited to return to cooking on gas at the GTC. Jan just reno’ed the kitchen, and I feel like I am the prime beneficiary at times. Now I must remember the spice box…

Packing has commenced, and we’ll finish up after a short swim in the probably very cold Penticton pool, which had been closed for annual maintenance starting (of course) the day I arrived and finishing (of course) the day I leave. But Summerland pool filled the gap admirably, even if the shallow end is a bit absurd. And for all those people who didn’t swim in the lake, you missed out. It was beautiful. Had my final swim until ’09 with Ogopogo this evening, and it was still nice.

Time for bed, since it will be a long day of sitting tomorrow. But before I forget, the best part of the Okanagan? It’s right here:

My favorite Okanagan wine – Sandhill One

2 thoughts on “Off From The Okanagan”

With the official announcement of Jedi: Survivor, seemed a good time to show off my latest office decoration courtesy of @respawn. Working on @playapex is amazing. But it's just one of the awesome projects we have ongoing.