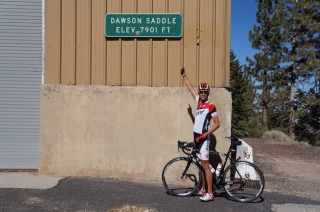 It’s not the most substantive update, but it’s an update nonetheless. After a nice lull immediately after Ironman Canada, things were a bit crazy for a while. I drove to Interbike from home in Penticton, then drove home to California to drop our car off. I then flew back to Penticton, spent two weeks there training for ITU Long Distance World Champs, then flew to Kona for the launch of the new Specialized Shiv tribike, then flew back to California. Since arriving back, I’ve been focused on the final phase of training for the race in Vegas on Nov. 5th and also for Ironman Arizona, which follows 15 days later.
Today was the last big brick, and with all the climbing on course in Vegas (9,700vft), I thought I ought to head up to Dan Empfield’s to ride “The Big Loop,” otherwise known as the Angeles Crest “Century” (it’s only 94mi, but with 10,000vft of climbing), with an average elevation of 5,000ft, and with much of the ride being over 6,000ft and a high point of 7,901ft at Dawson Saddle (in the picture).
I like doing this ride for a variety of reasons. The first is that it is spectacular. It is, in my opinion, the most beautiful ride I’ve ever done, and if I had to pick only one ride to do for the rest of eternity, it would be this one (at least when the roads don’t have ice and snow on them). It’s hard to believe you can find such isolation within an hour of LA (and that much riding without a single traffic light), and I suspect people just don’t know it’s there, save for a few cyclists and motorcyclists. As much as I wish people would get outside and “do stuff” more, I’m glad they haven’t discovered it.
Another reason is that it’s hard. There is no easy way to ride, at altitude, a route with this much climbing and just cruise it. You have to ride it hard. If you tried to ride it easy, it would just end up being hard and really, really long. The best way to ride it is to have your foot on the gas. Of course, you need to be able to have your foot on the gas, which is why it’s probably good that September and October are the best months to ride this loop, since you’ve had all year to get fit. While I don’t ever train at altitude (except when I ride up here), it is amazing, to quote Coach Joel, how much fitness “is a great equalizer.” And if you want to test – and improve – your fitness, hitting The Big Loop will do that.
The last reason is because it’s a trip. It’s about 90min each way to drive up to Dan’s. I try to rope someone into SAGing for me; last year, it was Jill, but this time, I got Mark (our housemate in CA) to do it because it’s not fair to ask Quentin to spend so much time in the car. Water stops are few and far between, so it’s better to bring supplies. And with sharp rocks on the road (I’ve sliced a tire before), it’s nice to have a full complement of spare stuff close at hand. What this means is that there is a fair amount of preparation involved. It’s an effort to go and do this loop. And as much as, in this case, the terrain is good race simulation, it’s the act of mentally preparing for a big effort and setting a goal of execution that I believe is the most important race simulation. It would be awful to ask someone for help, to pack bags, buy supplies, pack the car, drive all the way up there, and then after an hour or two say, “well, I guess I just don’t have it today.” The psychological effect of placing an expectation of performance on yourself is something that is very hard to find outside of a race. But coming up to do this ride, I find I approach it very much like a race. I try to ride hard to whole way. And, I think most importantly, I try to perform to a level that justifies the fact that it’s reasonably inconvenient to come up here to do this workout. Everyone has bad days – myself included – and certainly I’ve felt in a rough spot now and again when doing this route, but I believe excellence in racing is largely about figuring out how to get the most out of what you have to give on a specific day. I’m always in awe of how Simon Whitfield was able to prepare and execute on a single day that happens only once every four years. And while no one but me knows how well I did on this ride, and it’ll always be there for me to do again, it won’t be there tomorrow. And, with the nature of my schedule, it won’t be there again until next year. So I set out to deliver on the day. And that’s the biggest takeaway I get from doing this ride…

With the official announcement of Jedi: Survivor, seemed a good time to show off my latest office decoration courtesy of @respawn. Working on @playapex is amazing. But it's just one of the awesome projects we have ongoing.