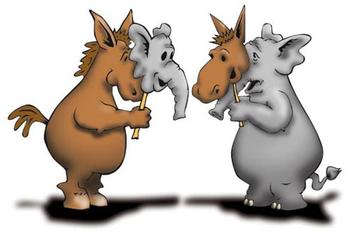 from MilitantLibertarian.org
Thank you to my mother who sent these to me in an email. Certainly makes you feel overwhelmingly positive with the election coming up…
We hang the petty thieves and appoint the great ones to public office.
~Aesop, Greek slave & fable author
Those who are too smart to engage in politics are punished by being governed by those who are dumber.
~Plato, ancient Greek Philosopher
Politicians are the same all over. They promise to build a bridge even where there is no river.
~Nikita Khrushchev, Russian Soviet politician
Politicians are people who, when they see light at the end of the tunnel, go out and buy some more tunnel.
~John Quinton, American actor/writer
Politics is the gentle art of getting votes from the poor and campaign funds from the rich, by promising to protect each from the other.
~Oscar Ameringer, “the Mark Twain of American Socialism.”
The Democrats are the party that says government will make you smarter, taller, richer, and remove the crabgrass on your lawn.
AND
The Republicans are the party that says government doesn’t work and then they get elected and prove it.
~P.J. O’Rourke, American comedian and writer.
I offered my opponents a deal: “if they stop telling lies about me, I will stop telling the truth about them.”
~Adlai Stevenson, campaign speech, 1952.
A politician is a fellow who will lay down your life for his country.
~ Texas Guinan. 19th century American businessman
I have come to the conclusion that politics is too serious a matter to be left to the politicians.
~Charles de Gaulle, French general & politician
Instead of giving a politician the keys to the city, it might be better to change the locks.
~Doug Larson (English middle-distance runner who won gold medals at the 1924 Olympic Games in Paris , 1902-1981)
The problem with political jokes is they get elected.
~ Variously attributed to Will Rogers and George Bernard Shaw