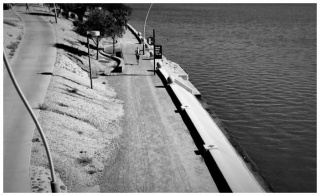 © 2014 Ben Powell
A lot of people go through life doing things badly. Racing’s important to men who do it well. When you’re racing, it… it’s life. Anything that happens before or after… is just waiting. – Steve McQueen, “Le Mans.”
It was a non-remarkable race in a string of 70.3 races this summer where I found something I’d lost. The race in Racine, WI was not particularly noteworthy in any particular aspect. I came 10th, getting run down in the last 100m or so. I swam reasonably well, blew up on the bike, and salvaged a reasonably good run. But I raced it. From gun to tape. The whole way. I had several of those, “I’m going to die” moments, and of course I didn’t. And I crossed the finish line with the tank empty. And it was a revelation. I remembered how to race. I didn’t do it particularly well, but I did it. Since that race, I finished a close 4th (Calgary 70.3), 3rd (Princeton 70.3), and – most recently – 3rd (Ironman Arizona) with the fastest bike split in two of three races and, technically speaking, also the bike course record in two of three races (Calgary & IMAZ). The 70.3 WC in Tremblant was lone outlier in terms of performance, and I think it was a result of being overly cautious, rather than being overdone. I finished the season on not quite the high note I had hoped and planned for, but I finished in a good spot – healthy and motivated and eager to take on 2015.

I mulled over a lot about what I should write to wrap up the year, but nothing really came to me of substance or import. I wrote a lot about a lot this year. I don’t know that I have too much more to say. But I came across this that Simon Whitfield wrote about a trip to visit the Brownlee brothers in Yorkshire. I think it sums up both what I lost and what I think I’ve found again. And it definitely sums up how I will be approaching 2015. It’s better than anything I thought of by a long shot.

They build them tough as nails in Yorkshire. Seeing first hand where the Brownlee brothers grew up showed me some of the factors that made them the incredible competitors that they are. Tough as nails, grit and fiercely competitive. An eye opening experience.

I had a poster on my wall as a kid, it said “the Kenyans believe they will win as clearly as they know the sun will rise the next day” – belief is the key.

This belief is ingrained and instilled; it’s earned. I can only imagine the hours upon hours the young athletes in Yorkshire spend outside, flying up and down the dales, earning this belief.

The Brownlees love to train. I asked Alistair if he could see stopping and he simply replied “stop what? I love the training, I love being outside”. He told me this on his second run of the day, an extra run just for me, showing off his playground “this is where I live, out there” he said from the top of the ridge. It was cold, dark, wet and absolutely incredible. He went on to tell me about his trip to mount Kilimanjaro last year with brother and his dad (both legends if you ask me). Blue lips and stumbling “like a drunk idiot” according to Jonny, they walked to the top. Apparently Alistair really struggled with the altitude, to the point it was dangerous but as their coach Malcolm told Lou and I, “those boys, they love to push themselves, they love getting to the edge and seeing what’s on the other side”. I believe what makes them champions can be summed up with one sentence.

EARN the COURAGE to BELIEVE in yourself.

And in their case, the love of whatever it is that you do.

Happy New Year everyone. May 2015 be a year of courage and belief for all of us.

10 years later, I'm still standing. And I'm still riding. If you have a dream, go after it as hard as you can. The world needs more of that. #aliveday