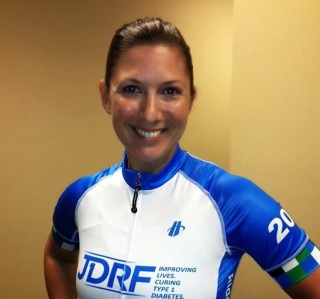 I am a true underdog, the one nobody expected to be an athlete, the nice girl who always finished last. About six years ago after the birth of my second child, I decided to lose weight and started working out. Over the course of a year, I lost 50 pounds and discovered that I LOVE CYCLING! This soon led to an indoor triathlon at the gym and buying my first used bike for $500 bucks. Over the years, she has carried me through numerous training rides, triathlons of every distance, AND in September we completed my first Ironman in just over 13 hours. I’m finally living the life I’m meant to live! My pals and I created our own local tri club which now has over 70 members. I’ve become a cycling instructor and personal trainer, helping others to accomplish their dreams. I am an ambassador for this sport that we love and I get to encourage others every day.

I cannot keep dumping any more money into my old bike, so this new bike will truly carry me to the next level in the sport. Your gift would inspire me to show up on race day and make you and Dimond proud, giving my best performance, worthy of the bike I’m riding. I have plans for my old road bike too – she’s going to be made available to anybody I meet who wants to try out cycling, growing the sport and changing more lives.

Of the final five, I simply said, “tell me what you would have told me if I hadn’t limited you to 250 words,” It was there that Jessie told me more about her story.

I am a regular person, a regular Mom, a Mom who has struggled with her weight and got into fitness so my fat butt could fit back into my pants.  In the process I found out that I am a decent cyclist and I have a high threshold for pain which makes me a natural for triathlon.  I’m an average swimmer and an OK runner too.  I went from taking indoor cycling classes at my local YMCA to doing a full Ironman (finished in 13:08) in roughly 5 years time.  I also got certified to instruct cycling and became a personal trainer all because I wanted to give back to others.  Through all of this I lost 50 pounds and fell in love with this sport.  I want to help others get into triathlon and show other regular people that ANYTHING is possible.  I have learned so much that I want to pass this knowledge along to others.

I would EARN every cent of that bike you give me through serving as an ambassador for this sport and for YOU.  Dammit, I would make you proud.  I would step my game up and make sure I compete to best ability in every race I enter.  I would take my ol’ road bike and loan it out to anyone who was considering buying a bike and just wanted to make sure they wanted it.  I would ride in every charity ride and local group rides and tell everyone about the bike I’m riding!  I know it would be an amazing gift for me and I would totally embrace it.  Whatever you needed – pics, posts, blogs, articles, general awesomeness – count me in!!!!

I have a really big heart, I love to write, I love to talk to people, I was BORN FOR THIS opportunity!!  Pick me, you’ll be glad you did.  It will make the best story and will catapult ME into another stratosphere.  I will then, in turn inspire the thousands of other regular folks out there, showing them that anything is possible and they too can become an Ironman!!!!

Thank you in advance for what you are doing AND for what you are accomplishing in this sport.  I’m a huge fan! I’ve attached a picture from my first triathlon 5+ years ago.  As you can see… the Dimond bike would be a HUGE upgrade for me – I need this, I really really need this!

That’s a LOT of exclamation points! But I was drawn to the simple earnestness of her story. She downplays her story as “regular,” but I think it’s anything but. The great old adage is, “everyone has the will to win; few people have the will to prepare to win.” Lots of people want to lose weight, get in shape, etc. How many people do it? Well, a lot. But even more don’t. And well, the final email she sent about jumping around for joy with her kids at the park and making a scene, that was what let me know I made the right choice.
Jessie’s charity is the Juvenile Diabetes Foundation, which is very special to me as one of my closest friend’s has a son who is Type-1. There are so many cheesy cliches about being a parent, but they are all true. And being a parent also makes you a kindred spirit with every other parent. I can’t explain it. If you are a parent, you understand. If you will be, you’ll understand then. If you won’t ever be, well, then I’m just crazy like the rest of us.
So, congratulations to Jessie Clark, age 39. She’s a triathlete, wife, and Mother to three kids.  She lives in Middle Tennessee just outside of Nashville and trains with local tri club MidTN Multisport. And she’s brilliant under pressure. She’s also going to be riding a Dimond.
Thanks again to everyone who submitted. Can’t wait to do this again next year. It’s hard. But it’s awesome.

One thought on “Put A Ring On It”

WFH has its downsides, but one perk is the gift of time. Making the most of my "lunch" break...