The title of the post is a bit of an homage to a classic Sergio Leone western starring, of course, Clint Eastwood and Lee Van Cleef. At the risk of drawing a comparison a little too far, Clint Eastwood’s character is referred to as “The Man With No Name,” kind of like showing up for an Ironman with 40 odd professionals entered and being assigned number 24. Not exactly auspicious…

The movie itself is the second part of a trilogy, the first part being a “A Fistful of Dollars,” which is the western version of Akira Kurosawa’s masterpiece “Yojimbo.” In both movies, our hero gets the crap kicked out of him in the beginning, only to come back and whoop some ass. This bears a striking resemblance, at least the middle part of the movie,” to the swim at Ironman Arizona. Our hero, that would be me, in case you hadn’t yet figured it out. This was my first triathlon of the year, my only previous race being the Desert Duathlon back in February. It was a bit of a rough start, but after that, I just messed up, in true western fashion, by trying to take on a whole gang by myself. In triathlon terms, this means I ended up missing the pack of swimmers whose feet I should have been on, and instead I attempted to fight the water alone. Water is a very large gang. 2.4 miles of water is a very, very, very large gang. Solo swimmer vs. said gang of water is a losing battle. And lose it I did, to the tune of a 55 minute swimmer, which put me roughly 6 minutes down on the leaders.

Now, in true western fashion, I came out of T2 guns blazing. Transition itself is a still a bit confusing with the change tents, since I’ve not yet mastered what to do when, but I’m learning. But biking, then I’m in my element. With a limited amount of ammo, unlike classic westerns where somehow guys get like 15 shots out of a six-shooter, I couldn’t just go crazy, so I stuck to my watts. Fortunately, I was not double-crossed by any of my equipment or my own sense (or lack thereof) of direction (i.e., I didn’t go off course). Of course, in between the gunfight that was the uphill climb into the headwind on the Beeline Highway, there was all the typical stuff you expect in a western showdown – drinking (of Gatorade), strong sun and people wilting under said strong sun, tumbleweed (occasionally blowing across the course, as it should have), more drinking, a bit of womanizing (if catching up to and passing the women that smacked me around in the water can be called that), even more drinking, and of course some shots of a lone gunman, I mean cyclist, riding along in the desert (with 2000 or so other lone gunmen and gunwomen). Just like Eastwood, I somehow managed to return from having the crap knocked out of me, and came into transition in third place, roughly two minutes down on the leaders, who were basically neck-and-neck.

Out on the run, I felt pretty good. I clipped through the first few miles a bit fast before settling into what I hoped would be my base pace for the rest of the marathon. It was definitely hot, but I felt really good courtesy of the heat training that Coach Joel put me through. During the second lap, the inevitable double-cross finally happened, as my own feet betrayed me and started to blister up. This was only a minor double-cross, and as long as my legs continued to be my allies, I thought I’d be ok. My pace slipped on a couple miles, and I seemed to be stuck continuously at about two and a half minutes back of the leaders. Started the third lap of the run, I then double crossed my own blistered feet, and picked up the pace. This wasn’t enough to hold off the eventual winner, Hungarian Jozsef Major, who with a 2:50 marathon (the fastest of the day by ~10 minutes), was like that guy who shows up with the gattling gun to a pistol fight. He motored right by me. As best as I could, I tried to stay on his feet, hoping he would at least carry me closer to the leaders. Jozsef reeled in James Bonney, and then he was gone. Mile 25 was pretty bad. I’d given a big effort to push with Jozsef, and I felt like it had been for naught. I had been unable to close the gap, and now I was going to be stuck in fourth. But then, out of the corner of my eye (in westerns, you can really ONLY see things out of the corner of your eye, because your hat is pulled down REALLY low over your eyes), I saw the bicyclist leading the third place male. I recognized him, because I’d been following him for almost three hours until I had suddenly, and ignominiously, been passed in the final stretch. I thought, “I can get there.” That is what happens to you when you do an Ironman, you get stupid. The desert sun beats down on your brain, and you think that it is a good idea to try to double your pace to catch somebody that is really quite a ways ahead of you. 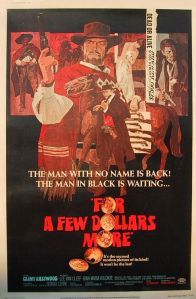 7 thoughts on “For A Few Dollars More…”