(Reposted this after getting so many requests for it. Specialized moved to a new platform and it was lost.)

As much as you might read the title and expect that this is going to be a compelling (or fluff) piece on why you must buy a Specialized Tarmac SL3, that is not actually the case. Though, in the words of Ferris Bueller, “It is so choice. If you have the means, I highly recommend picking one up.” No, this is simply about why you – the regular triathlete – needs *a* road bike. Before we get into why you need a road bike, there are some of you who do not need one. If you are this person, you can stop reading right now. If you never ride more than an hour and if you never ride less than 25mph (40kph for you sensible metric folks) and if you view your bike simply as a necessary evil to get from swim to run, then you are 1) very atypical in the triathlon world, 2) probably an ex-swimmer or ex-XC runner, and 3) not the kind of person that needs a road bike. There are a few of these folks in the world. They are not the norm.
Assuming you are still reading along, I will assume that you are not one of those types of people. There are two primary reasons to own a road bike. The first is simple – if you ride with other people, it is not optimal to have your brakes and your shifters in separate places. It’s also very much not optimal, unless you are participating in a Team Time Trial, to ride in your aerobars in close proximity to other people. Now, you may have an easy answer (in your own mind) to this “problem.” You will just ride in the “pursuit position,” which means with your hands on the brake hoods. And this is what brings us to the really real reason that you need a road bike.
Whenever you are NOT in your aerobars, you would better off on a road bike.
The reason for this has to do entirely with biomechanics. People who primarily ride their tribikes use the following argument, “I race on my tribike, so I should train on my tribike.” While this is true, most people do (or at least should, assuming they have been properly fitted to their bike and their saddle) race in their aerobars. If you do not race primarily – 90%+ of the bike portion of your race – in the aerobars, then you need a fitting on your tribike, in addition to needing a road bike. But let’s assume that you do have a good position on your tri bike and you do race in your aerobars. That’s a big assumption, but we will make it, especially since I spent the last two posts encouraging you to get the right saddle. The position that you are fitted to when you go in for a tribike fit is your aerobar fit. It doesn’t matter, really, how comfortable your pursuit position is. It just has to be “good enough.” There is only ONE position on a tribike, and that is the one in the aerobars. Everything is a compromise position. The reason is that the body angles (specifically the angle of your hips relative to your torso) change a LOT when you are not in the aerobars.
The position of your hips – your hip angle – in this position: 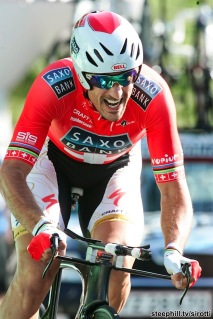 Is very, very different than in this position:

And that is why you need a road bike. Because the latter position – the correct position –  is much more similar to this position:

It’s quite easy to see when you look at the pictures.
Road bikes have three positions. Hands on the hoods (Fabian in yellow), hands in the drops, and hands on the tops. In all cases, your hip angle remains largely constant, because you will slide back in the saddle when your hands are on the tops and forward when your hands are in the drops. Furthermore, you can also bend your elbows to create the appropriate hip angle. Technically, you can also bend your elbows on a tribike, but this puts a LOT of weight on your hands, which ends up being a very uncomfortable (untenably so) position, and you still aren’t likely to get nearly as low as you would if you were on your aerobars.
So what this means is that every time you come up out of your aerobars, you are training in a position that is VERY different from the one you want to race in. And, ironically, in these moments, were you riding a road bike, it would be your position on that bike that would be most similar to the position you aim to race your tribike in. This is the position that will allow you to generate the most power, recruit the most musculature, and be the most comfortable. But you need to train in this position. Especially on a steep seat angle position, riding a tribike in the pursuits/hoods is really much more like this: 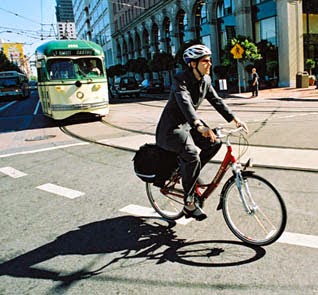 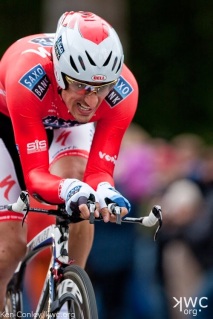 It’s this versatility of positions – all of which allow you to preserve a common hip angle – whether you are climbing, descending, sprinting, pack riding, or just out training that make a road bike so useful. You can train in the same position you will race in, only without needing to put your weight up on the nose of the saddle, crane your neck to see the cars and traffic lights up the road, or do any of the other things that make a tribike less than ideal for doing anything other than riding hard against the clock. And any road bike will do this for you. You can spend less than 1000. You can get entry level parts. You can even have (gasp) a triple! It doesn’t matter. The most budget, non-carbon, simple roadbike is going to be the best training tool that you can buy. And it’ll make you feel that much faster (because you’ll actually be faster) when you do take your tribike out for the kind of ride it was designed for – a hard and fast one. Of course, a really, really, really nice road bike also works well too! But it’s the positions that it offers you which make it so useful. So if you want to end up like this, well then you need to train that way, which means you need a road bike…

9 thoughts on “Why Triathletes Need A Road Bike”

10 years later, I'm still standing. And I'm still riding. If you have a dream, go after it as hard as you can. The world needs more of that. #aliveday